Finally - two minutes to catch up with the blog!  I have been a busy wee crafter over the last few weeks. 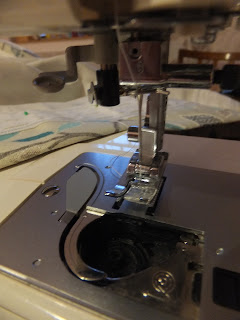 The house has been desperately needing proper curtains.  All our windows are single glazed and after the rain and snow of recent weeks, we have been feeling the cold.  I wanted to line the curtains and with the way the pattern was laid out, was going to have to join the fabric to make the right width for the window.  I was finalising my measurements to work out the hems and realised that the width of the fabric was the exact drop I needed for the windows.  I remarked to Mr H that it was a shame the pattern went the wrong way as it would make it much easier to sew.  The fabric had a leafy design and after a quick squint at the fabric we decided we liked it just fine going sideways!  So the curtains needed no joins and were much easier to make - yay! 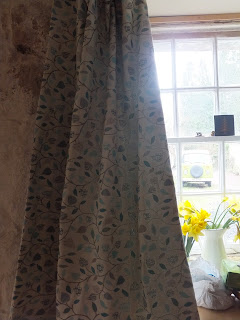 After all that work I felt I deserved a wee treat craftwise and decided to do something frivilous.  I had long fancied making a crochet blanket for my bed and decided to try out some granny squares.  I had a few odds and ends of wool that I rescued when a friend was clearing out, so got to work on a wee blanket for baby Lollipop. 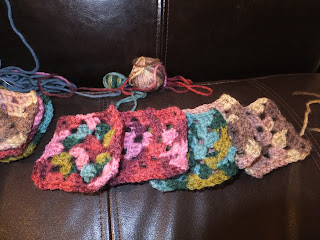 I have no idea what kind of wool it was but the colours went quite nicely.  After making a few squares I realised I didn't have enough wool to make a blanket, so I made a wee mat for the windowsill.  It looks nice with a spring vase of flowers. 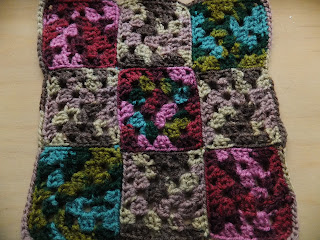 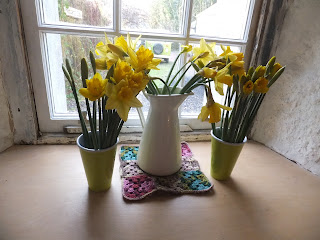 I was really pleased as the granny squares were so quick to do and decided to look for a pattern for something bigger.  A quick scout on pinterest brought a new blog for me.  According to Matt has a similar colourbase to Attic 24 and as all my walls are white, bright colours fit in quite well.

I fell in love with Matt's granny square blanket and after a few days of telling myself I had lots of other things to do.....


I splashed out and bought the Stylecraft Special DK Colour Pack (Hunt about on google for the best prices) that Matt had used.  I also added in 3 darker colours to make the overall look a little less pastel-y.  I added green, claret and raspberry.  I'm going to try and make the blanket completely random and have decided to join as I go and will try to sew in the ends as I go too - wonder how long that will last?!

Work is progressing steadily and I've borrowed a friends yarn winder which makes the balls a little more manageable and they take up less space.

So hopefully I'll have more pics soon, have fun, xx


I always feel that January flies past and is a very busy month.  After the chaos of the pre-Christmas rush and then the idleness of New Year, I'm usually good at starting the year by getting things done!

The weather has been quite chilly over the past few weeks, but we wrapped up warm and headed up to the top of a nearby field.  KP was quite tired and the walk didn't last long but it was nice to get out.  Hot chocolates all round when we got home.
It's been the kind of wintery weather that makes stodgy food so welcome. 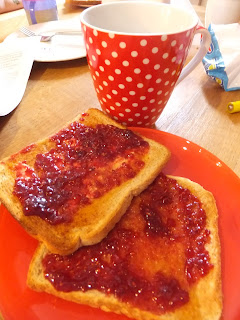 A cosy breakfast with some posh raspberry jam (my Mum makes up a Christmas hamper for me each year) and my new spotty mug.  Just the right size for the morning caffeine hit.  Imagine my dismay when the handle cracked 2 days later. ;-(

I tried an old recipe from my great-grannies cook book too and made sausage pie.  When I read the title I imagined nice pastry, but it turns out it's more like cottage pie, but made with sausages. 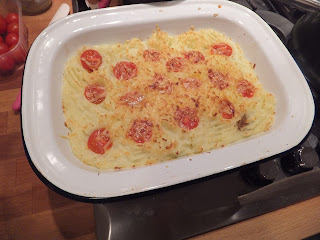 We tweaked the recipe a wee bit, adding a few more ingredients.  There were 4 clean plates at the end of the meal, so we'll assume it was a success!


I thought I'd share some lovely pictures of a building Mr H is working on at the moment.  It was a children's day nursery for many years and is being converted back into a house.

I think I'll need to sign off now, the kids are starting to lose interest in CBeebies so back to work for me! ;-)

Happy New Year to everyone, what a year 2012 turned out to be.  I only started blogging in September 2011 and made it to March 2012 and then it all stopped.  I do have a good reason, honest! 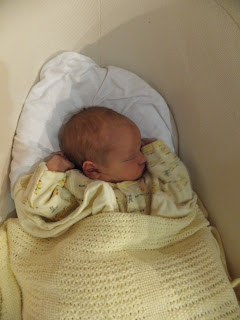 There she is, little Lollipop.  We were taken a little by surprise but now can't imagine life without her!  I suffer from pretty bad morning sickness, although it was as usual, worse at night.  For the first few months I was asleep most nights by 8 o'clock, so my blogging time was spent in the land of nod!

With a new arrival imminent, we had to try and finish the house so it was off to storage with furniture and boxes, plastering finished and walls painted.  The outside of the house was rendered and the floors inside sanded.


Skirting boards and door frames were cut, painted and fitted (mostly by me and bump) and the girls finally had a finished (more or less) bedroom to sleep in.  I finally put door handles on the kitchen cabinets and took the protective film off the doors (the kitchen had been in for about 20 months so it was almost like having a new kitchen again)  Our bedroom is now painted too although it was done after baby arrived and while we were in hospital.  Phew!

The garden has been totally neglected and if anything is in a worse state than it was before.  I still managed a little bit of crafting but not nearly enough!  The girls have grown and are turning into little characters, so alike, but so individual.  They think their little sister is great and have become very helpful, getting nappies for me and rocking her moses basket - long may it continue!

* finish all the painting in the house - mostly windows
*get the house in order - back to using flylady to organise the chaos
*craft, craft, craft, hopefully making some nice nicknacks for the house
*tackle the garden, some flowers would be nice and some home grown vegetables
*spend vast quantities of time with the kids, playing, entertaining them and generally having fun
* go on holiday, somewhere, anywhere!

Let's see how we do, I hope you'll join me, look in often and leave nice comments to encourage and cajole me.

Hello blogland, I've been missing in action for nearly a month.  My camera has been broken and I've been taking snaps on my phone, but Mr H has the cable at work so I can't show those pics either and I have some beauties!

I have also been crafting my socks off.  My girlies now have curtains in their bedroom (yay) and I may even get some up soon in my own room.  February's craft project has taken longer than planned and been slightly highjacked with a 'this one I need to finish' project so I am plodding along slowly but hope to be posting regularly soon.

I had a lovely message from Lyn asking how March's scavenger hunt was going, truth is I wrote down the list on a piece of paper at the start of the month and promptly lost it.  March seems to have been a terribly disorganised month ;-)  I'll pop over to Postcards from the PP and write out another list.  I still have 4 days to come up with the goods!

Habbie tot
I'm a stay at home mum to 3 girls, I like crafting (crochet and patchwork at the moment) gardening and enjoy making things in the kitchen especially if I have gathered the bits from the highways and byways! 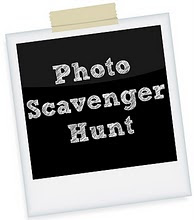